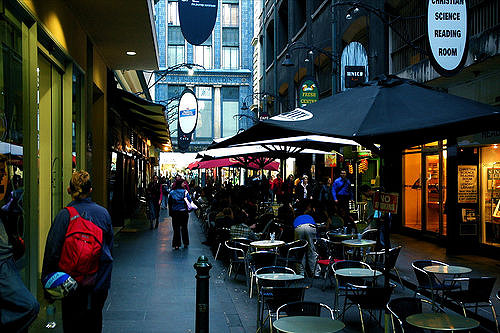 This walking tour uncovered a sample of Melbourne’s laneway character. Melbourne’s persona is fondly captured by the revitalization of the city’s laneway network, and this walk visited several milestone precincts that have contributed to this regeneration, including new developments that provide active connections through their ground plane, as well as the emerging character of some of Melbourne’s forgotten laneways.

These public assets were discussed as they relate to the following topics: heritage, textures and materiality; public amenity; the confluence of people and cars; intuitive desire lines; and cognitive placemaking.

The Melbourne Planning Scheme (Clause 22.20., 29/01/2015) describes four characteristics that contribute to the success of laneways for pedestrians.