Manhattan Building of 1891: Prototype of the Skyscraper Form 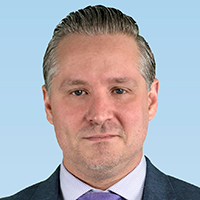 In the late 19th century, buildings were constructed in masonry even though they were Tall Buildings for their time. These included the Philadelphia City Hall (begun 1871- completed 1901), the Auditorium Building with tower completed 1889, and the Monadnock Building completed 1891. These masonry solutions produced several drawbacks commercially. Buildings in Chicago began designing with a new material as a response to these deficiencies.

A key location in Chicago is the area immediately near Dearborn Station. It provided rail access to eastern and southern markets. Chicago's printing industry was located here and urban density became an important objective. The area north of the station was defined by narrow blocks without alleys. This atypical arrangement provided the street access that printers desired. Only surface streetcars provided transportation in the downtown.

In this setting, William LeBaron Jenney was designing buildings in a new form. Cast iron was a well known building material but steel was a new product with great possibilities. However, there were no standard steel specifications: ASTM founded in 1898. Designers like Jenney relied upon manufacturers' published catalogs for yield strengths. He learned the properties of metal skeleton construction from his designs for the Leiter Buildings, completed in 1879 and 1890, and the Fair Store, completed in 1892.

Urban density and skeleton construction came together in the Manhattan Building. It has cast iron columns for compressive loads and steel beams for flexural loads as an economical solution. Spread footings inside of the property lines reduced weight transferred to the neighbors' properties. Setbacks created smaller top floors, concentrating building weight to the interior of the site. It was the first to employ a metal structure to resist lateral windloads instead of traditional masonry walls.