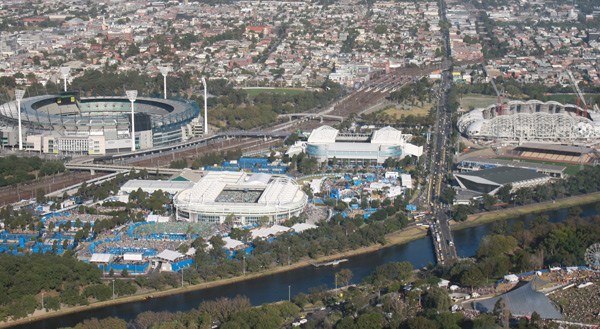 Melbourne’s Sports and Entertainment Precinct comprises a series of world-class sports stadiums and venues such as the renown Melbourne Cricket Ground (MCG), award winning AAMI Park stadium, and Melbourne Park featuring the Rod Laver Arena. Connected to the heart of the city, the precinct is accessible for locals and tourists alike through easily accessible pedestrian bridges, trains stations, trams, road, and river jetty. This tour explored this important urban domain, touching on its role in centralizing public activity and establishing a focal point for cultural activity in the city.

The precinct is considered to be Australia’s “premier sports precinct” and regularly hosts some of the biggest domestic and international sporting events, including the AFL Grand Final, Australian Open, and Boxing Day Test. The venues have also previously hosted the 1956 Summer Olympics and the 2006 Commonwealth Games. Victoria’s major events calendar is arguably one of the most prestigious and successful in the world, delivering huge economic benefit to the state. The Victorian Government consistently invests in the precinct in order to retain its position as an internationally recognized events destination and cater to Melbourne’s growing population.

The precinct has become an internationally recognized trademark and icon of Melbourne, which showcases the city’s love of sport and culture.