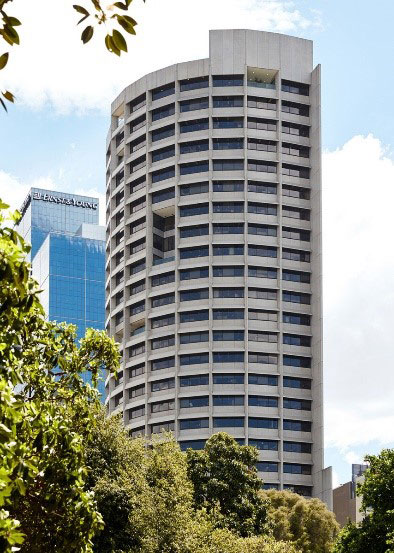 Those interested in the work of Australian architect Harry Seidler attended a tour at 1 Spring Street, Seidler’s only tall building erected in the State of Victoria. Wandering the floors, participants were able to study the late Modernist architecture, which attracted debate and controversy when first opened in 1988. Participants also had the opportunity to examine the building’s art, public space, and workplaces, all coexisting in a successful commercial tall building. A rooftop view also allowed participants an unimpeded view of Melbourne’s Hoddle Grid of streets, defining the boundaries of the central business district. Originally known as Shell House, 1 Spring Street was erected as the third headquarters for the Shell Company of Australia Ltd and replaced the earlier headquarters buildings constructed in 1933 and 1958 and remained occupied by Shell until 2004. Located on an L-shaped site at the southeastern corner of the central Melbourne city grid, the curved façade turns the corner of the block, creating a bookend for the urban street wall facing the Treasury and Fitzroy Gardens at the edge of the traditional central business district, while maximizing views to the south and east. 1 Spring Street is the only completed high-rise project by Australian modernist architect Harry Seidler within the State of Victoria and was composed of simple geometry, typical of late twentieth century office towers with… Read More