For the “Power of the Icon” program, delegates arrived at the various “main entrances” of the Dr. Chau Chak Wing Building, designed by Gehry Partners. This building is uniquely situated in Sydney. It allows visitors to enter from the faceted, glass side of the building at street level, and also provides access on the warping, masonry side of the building, with a third-floor entrance that directly connects the building to The Goods Line, Sydney’s 500-meter pedestrian pathway and linear park, which is similar to the New York High Line.

The entire group eventually made its way to the eighth floor of the building, where Brian Moore, Manager of Delivery, University of Technology, Sydney began explaining the viability of a university investing in such an iconic project. He focused primarily on design decisions that were discussed between Frank Gehry and the clients, and their methods in achieving the goal of creating a modern icon for Sydney and the university, but also referencing the heritage and vernacular that the city already possessed. He explained how this building, located along the edge of Sydney’s Central Business District, uses its two distinct façades as a way to reference – and almost blend into – the surroundings: when viewing the building from the west, one sees the building’s glass façade with Sydney’s primarily glass and concrete skyscrapers as a backdrop; when viewed from the east, one sees the curving masonry of the building in front of some of Sydney’s older, primarily brick buildings.

George Cunha, Associate Principal, Arup, the structural engineer and brickwork design engineer of the project, and Daniel Bakewell of DJRD Architects, the local architect of the project, presented the challenges that this building posed in the actual design and construction process. In addition to showing the technologies that went into creating the undulating brickwork, they also focused on some of the interior details. This included the design of the oval classrooms and adjoining staircase, which were structured with glue-lam pine beams, stacked in a “Jenga-like” fashion, and the polished-steel staircase that is the focal point of one of the building’s entrances.

Following the presentations, the attendees moved downstairs for some coffee, and to bring up any questions they had for the morning’s speakers. Next, everyone was led out onto The Goods Line, where Stephen Giblett of Mott MacDonald Group began the tour of the building. In the tour, the group was able to view all of the exterior curtain walls of the building, as well as all details that had been mentioned in the earlier presentations. When the tour group entered the oval classrooms, Giblett discussed the amount of technology that went into these spaces, including many projectors, microphones, and cameras, as these spaces were designed as a place of international collaboration – a place where classrooms around the world could “dial-in”, essentially creating a lecture hall that spans multiple countries within an intimate, wooden classroom.

The tour concluded on the west side of the building, where the delegates split up to continue discovering Sydney. 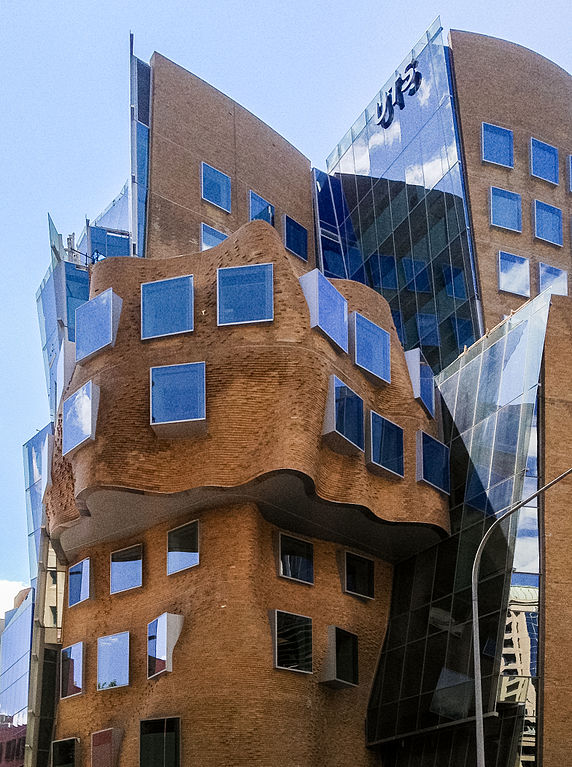