The off-site program “Double-Skin Facades: The Cutting Edge,” kindly organized by Architectus, began in the stunning ground-floor lobby of the host building,1 Bligh Street, above which lies a central atrium running the entire height of the building. Delegates were greeted here and whisked upward to Executive Center on Level 26, where three presentations by the project team provided background for the tour to come.

Ray Brown, Managing Director, Architectus, began by framing the importance of 1 Bligh Street in the context of urban development in Sydney. The building boasts a number of firsts for the Australian market, including a double-skin façade, a fully automated shading system, a full-height naturally ventilated atrium with breakout spaces, solar thermal tubes, and a tri-generation system. Brown explained that the lack of external columns along the double-skin façade optimized the amenity for occupants by facilitating continuous perimeter offices and creating a high degree of equitable floor space.

Next, Kerryn Coker, Principal, Arup, provided a technical overview of the double-skin façade. Coker explained that the biggest factor in delivering this unprecedented system in Australia was collaboration among stakeholders throughout the design process, and a clear set of shared goals. After sharing some of the system iterations with the audience, Coker was followed by Haico Schepers, Principal, Arup, who touched on the building’s other services, all of which were implemented with the same goal of high sustainability and occupant comfort. Schepers went into detail on the tri-generation system and the blackwater recycling system, which is unique in that it syphons blackwater from the public utility and processes it on-site in addition to the blackwater generated by the building.

Following the captivating presentations, guests were escorted to the top floor of the building, where they explored the crescent-shaped rooftop sky garden, which offered pleasant views of the city and harbor 28 stories above ground level. The group then proceeded several floors down to the mechanical floor, followed by a visit to the basement parking level, where the blackwater treatment center is located. Here, guests learned that the processed blackwater is used to flush toilets and provide makeup water for the cooling towers, ultimately reducing the demand on municipal potable water by 90%. Finally, delegates were escorted outside to a lush green wall sited near an outdoor café. The group proceeded to converse over coffee and ask some final questions, before thanking the hosts for an enjoyable program. 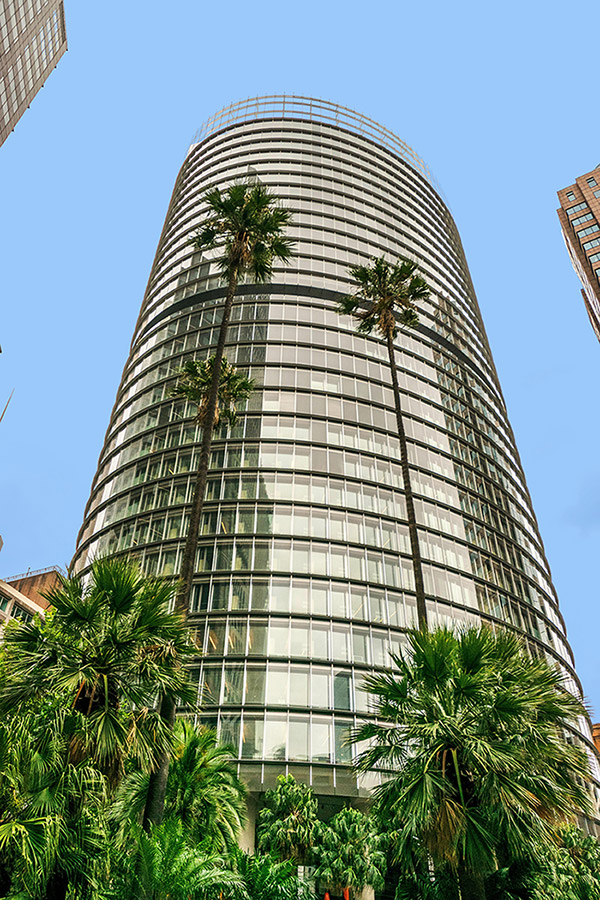 Instead of attempting to create an iconic new high-rise landmark in the heart of Sydney’s financial district, the client and design team of 1 Bligh Street desired to set new standards for site consciousness and sustainability. The new tower, located on a corner site in a densely packed district of the city, does not stand out as the tallest building in Sydney’s skyline, but instead has become well known as a welcoming and pleasant place to work that integrates well with its environment while responding directly to concerns of resource and material use.

Located at the convergence of Bligh, O’Connell, and Bent Streets, the client’s goals for the new tower were to create a flexible, efficient, and transparent design for the boxed-in site. Across Bent Street lies a public plaza,… Read More